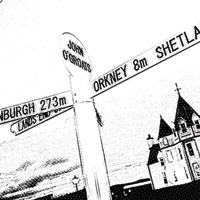 To encourage the rare Great Yellow bumblebee, we’ve taken an area by the Inn at John O’Groats and had it top soiled and seeded with a specialised ‘coastal mix’ of grass & wild flowers. The idea is to let the area grow wild and to allow the fauna to develop over a number of seasons. The coastal mix we have purchased is designed to attract an endangered bumble bee ‘The Great Yellow’ which has very low numbers in the mainland UK. The overall aim of the project is over a number of years to allow the species to flourish again and to allow the sanctuary to grow in time.

The main cause of bumblebee declines is the loss of flower-rich habitat. The Bees for Everyone project uses targeted zones around existing rare bumblebee populations (with a 10km buffer) to prioritise where habitat creation and restoration is most needed. As part of our Bees for Everyone project, the Bumblebee Conservation Trust is working with landowners, farmers and conservation organisations to create and restore the flower-rich habitats bumblebees need, and safeguard and strengthen rare bumblebee populations through targeted habitat restoration and creation.

Natural Retreats at John O’Groats is located within the Zone A of BBCT’s target areas for habitat restoration. Beneficial management could help to expand existing rare bumblebee populations, as well as support the more common bumblebee species.

Grassland management at Natural Retreats John O’Groats also helps to meet the key priorities of the executive Scotland Biodiversity Strategy “Scotland’s Biodiversity: It’s In Your Hands”1 to ‘halt the loss of biodiversity and continue to reverse previous losses through targeted action for species and habitats.’

Caithness is home to some of the UK’s rarest bumblebees, namely the Great Yellow Bumblebee (Bombus distinguendus) and Moss carder bee (Bombus muscrum). Both of these species are UK Biodiversity Action Plan (UKBAP) species, in recognition of their vulnerable status in Britain.

The Great yellow bumblebee is one of the two rarest bumblebees in the UK and is restricted to just four or five meta-populations, one of which is Caithness. Its colour is distinctive, being all yellow except for a black band between the wings. It emerges relatively late in the season, around June, and can last well into September depending on the weather. Late flowering species are crucial to help the new queens lay down fat stores for the winter hibernation. It is a long-tongued species and has a preference for deeply lobed flowers.

The great yellow bumblebee was once widespread throughout Britain. It was never a particularly common species, but in recent years its range has become restricted to northern coastal areas such as John O’Groats.

The site is a patch of uncultivated ground situated between the coffee shops and the Natural Retreats lodges, roughly 0.25ha with a banked area. A few species are already visible such as yarrow (Achillea millefolium) and black knapweed (Centaurea nigra). The ground is gravel-based and has not been top-dressed, which is ideal for establishing a wildflower patch.